By the mid 1980’s, The Original Whistle Stop was RIGHT on TRACK.
Model Trains were selling well. Interest in the hobby was high. The shelves were bulging with state of the art products. The customer list was growing.

Though they didn’t know it at the time, the Original Whistle Stop was to sponsor it LAST excursion of the Sierra Railway. The triple-header, featuring all three remaining steam engines on the railroad, left the station for its final run. The excursion hosted passengers, half from Wayne’s Sacramento store, and half from the Pasadena store.

On that day, a legend was born.

(Not unlike the Loch Ness Monster or Bigfoot !!!)

Lit by a setting sun, the day’s final photo run-by
was staged at the center of the hill.
Just as the three locomotives, with throttles wide open,
charged toward a line-up of eager rail fans,
an earth moving “roar” which could be heard
around the globe, came not from the smoke-belching
beauties, but from the photographers, acting as one,
screaming at a lone figure of a the man
emerging from a bush in the foreground.

It was no mistake, his curly head of hair and wide “W.T.F.H” smile – was running – frantically –
right in the front of their viewfinder.

Legend has it, that figure, known today as
“Fast Freddie”
was SEEN, but no clear photo has ever
been produced…
Until Today! 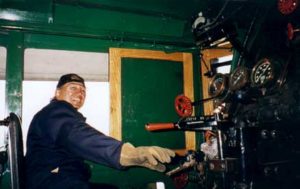 Since we’re talking about Historic Train Trips …. Here is a memorable one …..

Sorry … Back to the History ….
Meanwhile, back in Pasadena, Fred and Brian were about to face their greatest challenge. The building in which The Original Whistle Stop occupied for more than 30 years was going to be under new management. The continuation of the lease was not forthcoming. We had to move. 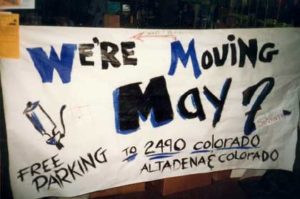 Fred and Brian were determined to keep the business in Pasadena where its roots were firmly grounded. A site not far from its birthplace was found. (1.5 miles up Colorado Boulevard) The new location needed a great deal of work. 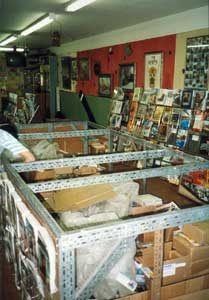 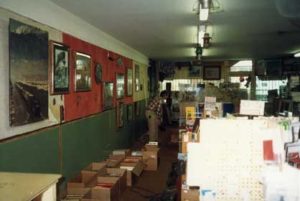 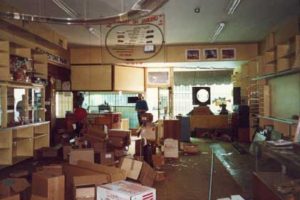 Virtually every surface had to be stripped, walls replaced and built, counters designed, cabinets for books and brass constructed … ceiling replaced … 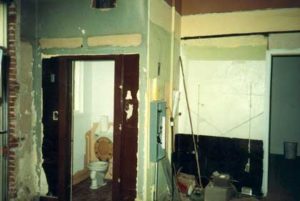 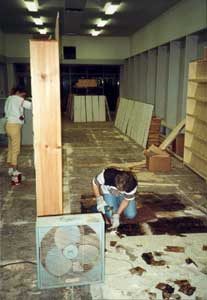 attic storage provided … shelving cut and laid … and of course room for all that product. 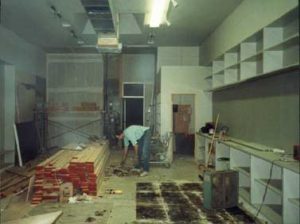 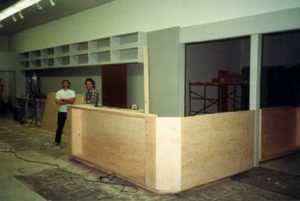 In April, 1988, after months of late nights spent hammering, painting and moving product all on a tight budget, a small crew of friends and family
and all of us sick to death of pizza …. 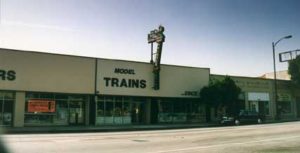 For several weeks we were “living out of boxes”, the completion of the new display cabinets were installed and the layout, still in the center of the store, was designed.

It almost goes without saying that moving a business, like The Original Whistle Stop does not happen without a glitch or two. One notable hurdle was an obscure passage from the City of Pasadena’s sign laws. It forbids animated neon signs, which protrude from buildings.

The Original Whistle Stop’s classic neon train sign, dating back to 1951, was in the opinion of the city counsel, an “Eye Sore”. After months of negotiating, haggling, and persuading, Fred and Brian found an ally within the Pasadena Cultural Heritage Foundation.

The sign was justly named as a California Cultural Historical Landmark, which cleared the way for its installation above 2490 East Colorado Boulevard.

Today and everyday since 1951, The Original Whistle Stop’s famous sign hails passerby’s and those for whom the store is a destination.

In History Part 5, we will tell you about our most trying time and a little about how we have brought our store to customers far from Pasadena.

Thanks for being on Board.