Welcome to the year before the Millennium … and yes lot of changes are taking place at The Original Whistle Stop.

“THE MAN ABOUT (TRAIN) TOWN … FINALLY SETTLES DOWN”!

On a beautiful mid-June summer day – the longest day of the year to be exact – a beautiful blushing bride paces her Mammoth home. The time is getting closer and he “promise” that we would be there.  And just like the railroads” … on time!

It is not that she was worried he didn’t want to marry her after all they have lived together for the past 13 years … no it was more of a competition of who took precedence in Fred’s world.

And in normal Fast-Freddie fashion ….. driving at what can only be descried at “light-o speedo” acceleration … Fred was truly trying to get to the church (or in this case … the boat) on time.

In fact … “big red” pulled up into the parking garage … with one hour prior to the launch. 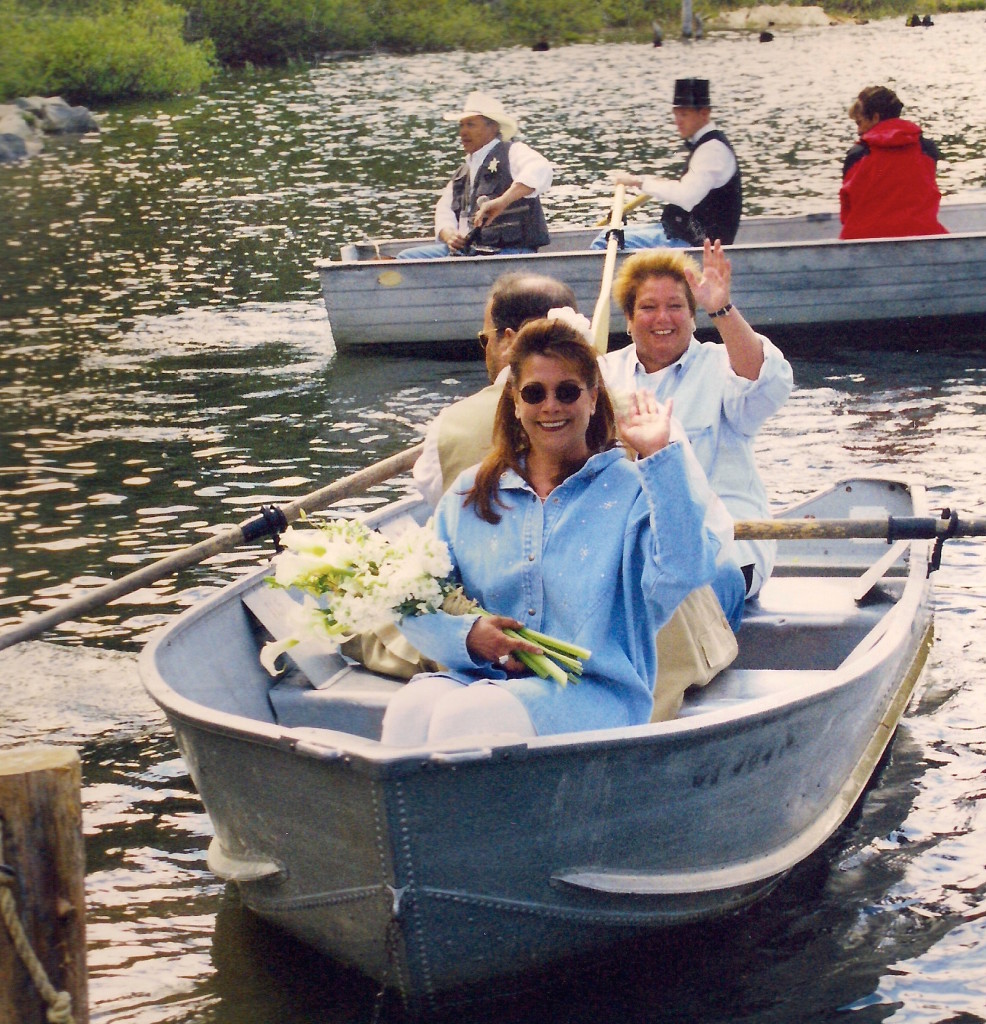 How dedicated is Fred to this industry … dedicated enough to get married the very same weekend as the Sacramento Railroad Museum’s – Rail Fair 1999 – and attend BOTH. (talk about being in two places at the same time)

After all, how could he not go to Sacramento …… his favorite black woman – the one he “secretly admires” … thought its not as much of secret as he thinks.

SF 3751 was showing off her sleek, sexy, and powerful body and naturally, he volunteered to be a crew member. 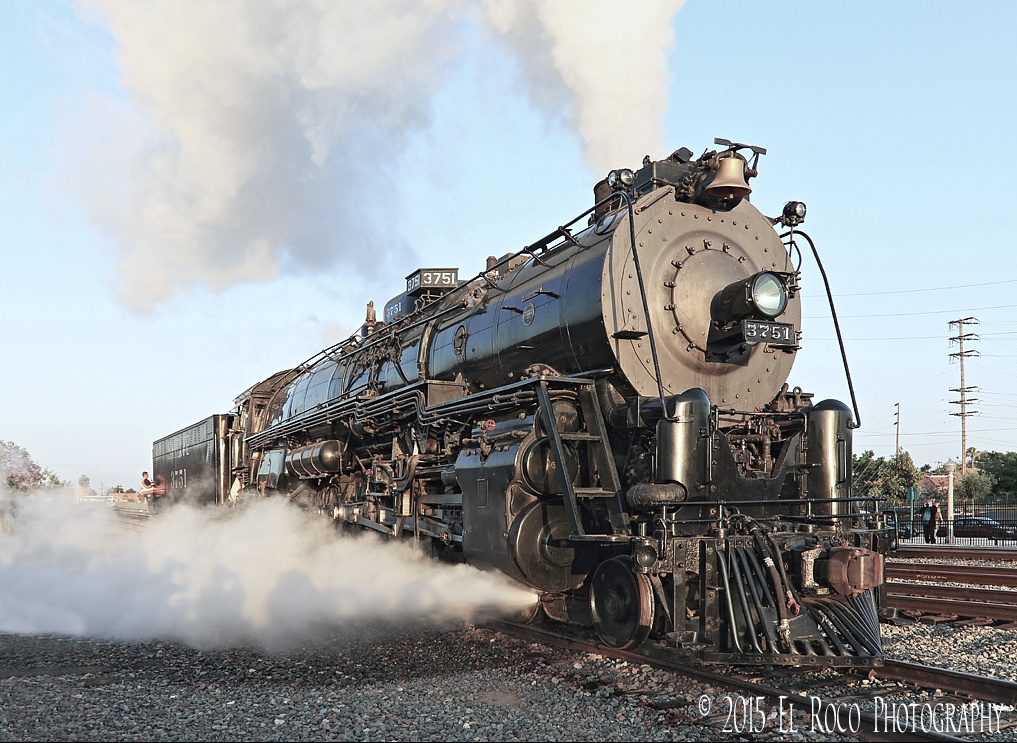 For Fred, learning how to operate and fire a steam engine was on his bucket list of life’s adventures … and with a late lesson that day,  he forgot all else (including he fact he was getting married the next day)

Once he arrived in Mammoth – and everyone was able to “exhale” … he slipped out one set of jeans – all greased and geared, showing clear signs of railroad workman distress – into a fresh pair – with a white shirt, vest and orchid on his lapel.

As he hurried out of the house to head to the lake to meet his bride … he had a thought … “I should take my fishing pole … you never know there might be an opportunity for a cast or two… before I read my vows”.

No one even questioned why Fred brought his pole to the boat – especially Judy. 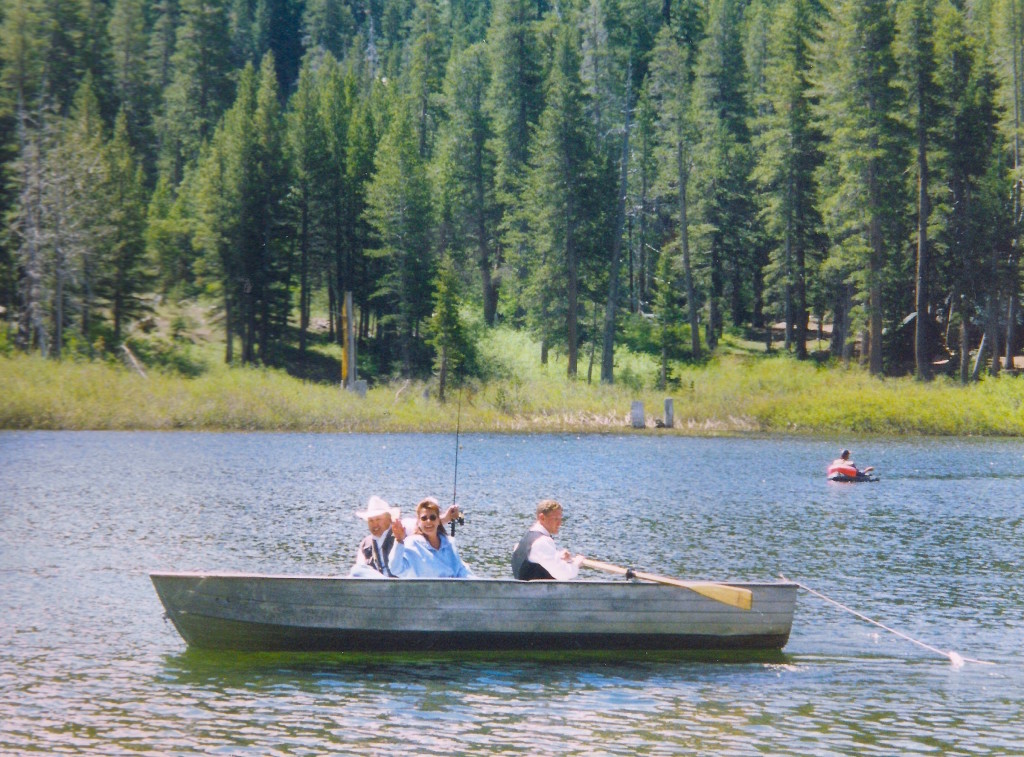 So on that beautiful mid-June summer day, The 21st of June, as they stood together in “their” boat, before the Minister, family and friends … they became husband and wife. 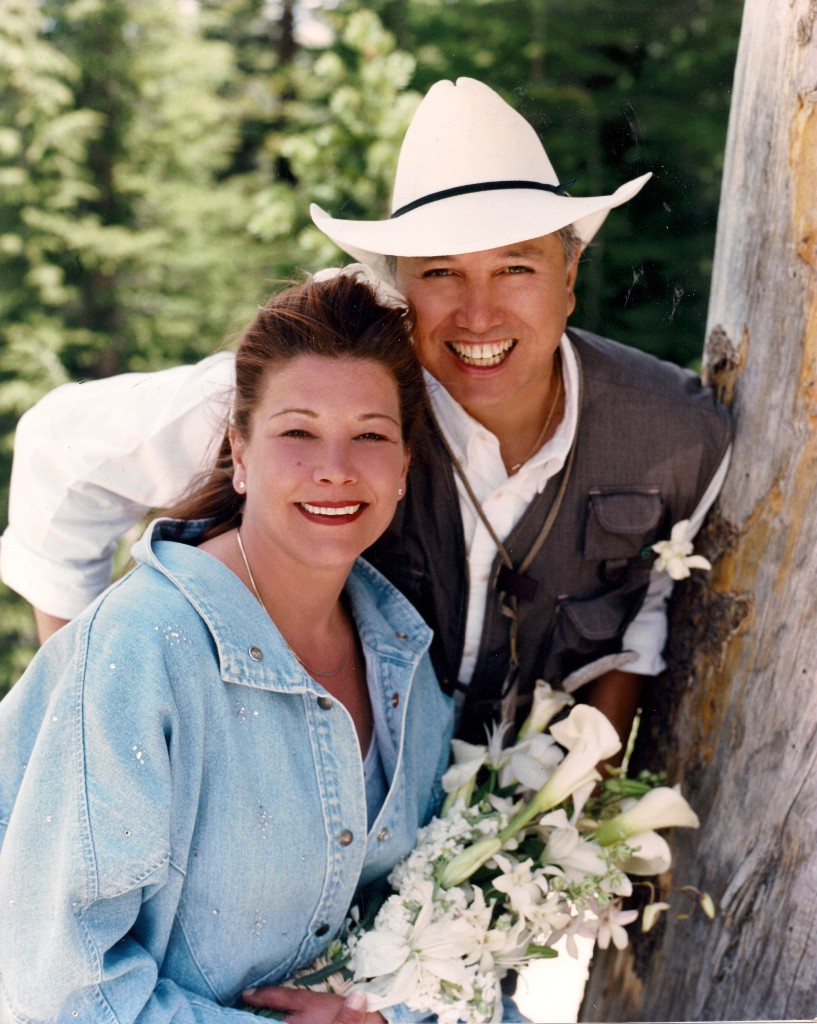 History will remember the time when … Judy came to work at The Stop!

Barbara – Fred’s long-time Assistant ….found another job … (apparently there is some place that is more fun to work for than with Fred and Brian at TOWS).

Fred turned to Judy to fill the preverbal shoes of the Administrative Assistant —- temporally of course … except that “temporary” position lasted nearly 10 years!

Though they lively and fiery discussions on “how to manage the store”  it was obvious – that working and living together was too much … for both of them.

Judy finally decided that being a Therapist was better than being IN therapy and decided to perused a career that could help individuals manage change and life transitions … Quite a fitting choice. 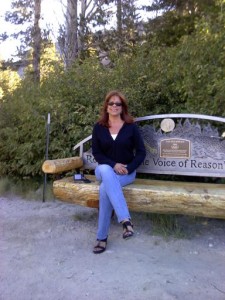 The quest for a replacement began. Fred was not easy to work for so finding a diamond in the ruff would be no small task. Placing ads in all the local churches and support networks, Judy realized that it would have to be an act of God for the “right one” to show up.

And it literally was … the next Sunday, while reading the highlights of the church’s newsletter, Sandra noticed the ad. When she presented it to her husband Kevin and son, Kyle – who both loved The Original Whistle Stop – the call was immediately made.

Sandra was hired instantly for:

1) Judy was afraid she’d wake up from this perfect dream and
2) she wanted to get her “in” before she knew what she had signed up for. Her qualifications and sweet demeanor; temperament and patience, was just what that mad house of men and mayhem needed …. a patient, caring, new mom! 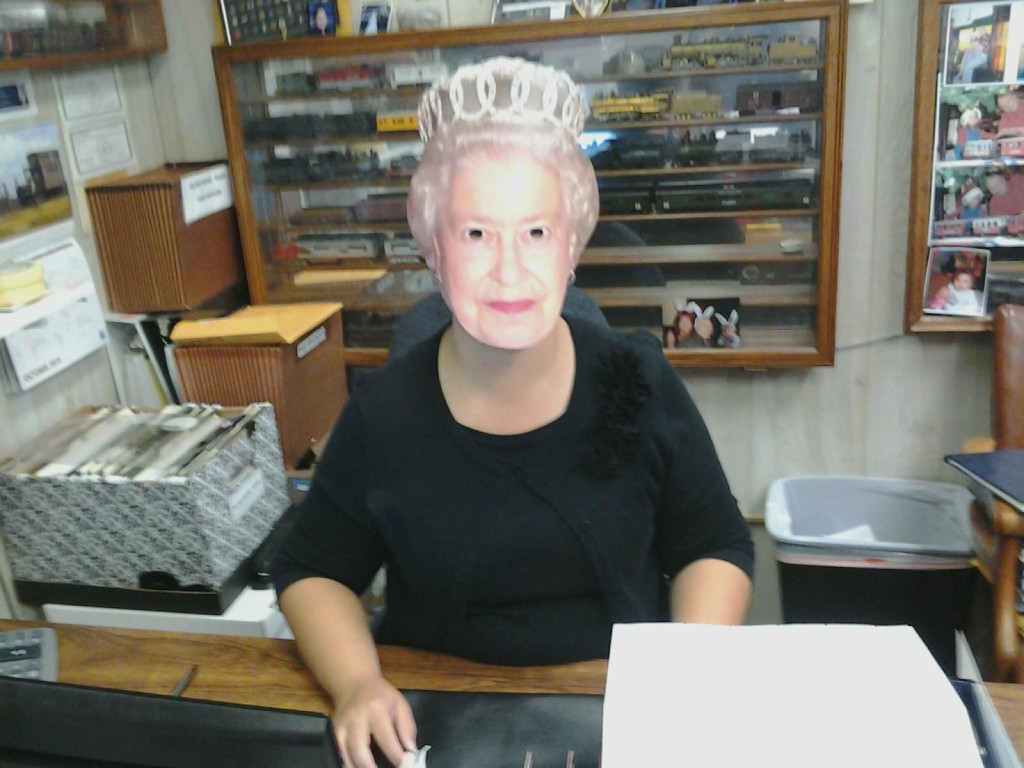 So on April 24, 2006 Sandra Perone became the new Administrative Assistant at The Original Whistle Stop!

3751 NRHS Convention Special and Steam to the Grand Canyon. 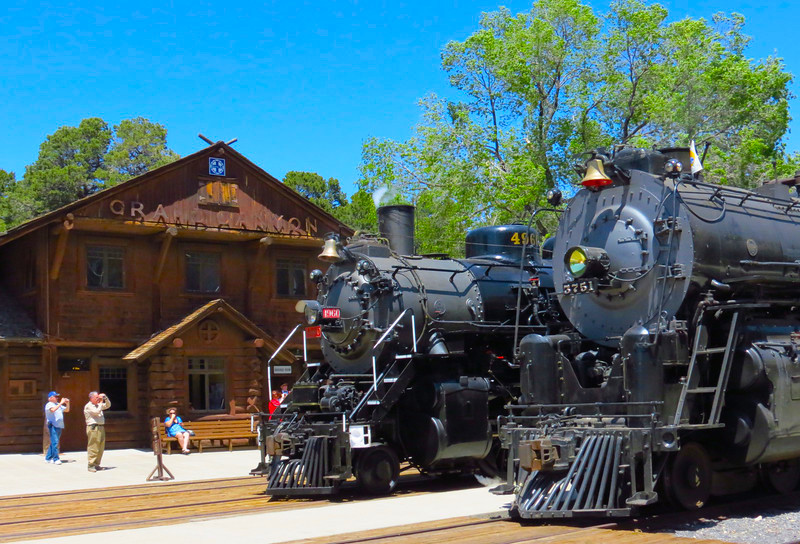 For those who missed it … no worries … you can relive the adventure through the thousand of pictures posted on the Internet, DVD’s, books, magazines and even globally on social medial, all reflect they joy of … chasing the “Black Engine”. 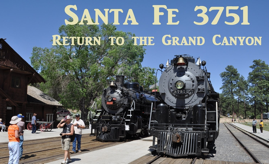 There had not been a mass excursion of this kind in 10 years – let’s hope for another one soon! 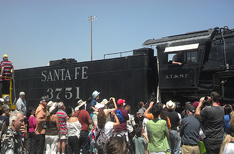 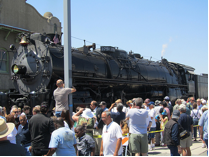 Alphabet Soup of the Hobby Industry.

Today, it seems that every business, product and industry uses acronyms. The challenge comes in trying to decipher what those initials stand for – this in itself can cause a derailment of sorts.

When it comes to the hobby industry … there is no shortage of organizations which support education and growth!

So, how…  you might be asking …  do these relate to The Original Whistle Stop … they all have one major successful component …

They all have Fred.

Over the years, we have all come to understand and appreciate that being “involved”, “having a voice” (a loud and persistent one at times), and being in a position to invoke change in the industry is the lifeblood in Fred

Fred’s stewardship to organize a disorganized a ragtag fugitive fleet of hobbyist, manufactures, distributors, retailers, publishers and Preservation foundations … tested his resolve (as well as his wife’s and staff’s) to “persevere” in his absence from The Whistle Stop.

And, for those who don’t know … Fred wears many hats!

He is a retailer, manufacturer, publisher, supporter/volunteer of foundations and above all else a hobbyist.

At this point, believe it or not … things calmed down for – and the machine knows as The Original Whistle Stop which was in full throttle – full steam ahead – everything was high green – and running on schedule 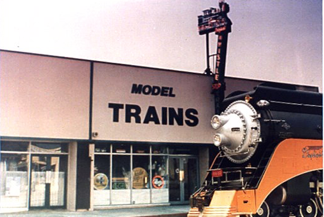 Now early 2007, the rumor mill of the retail hobby industry was buzzing …

Customers started sharing reports that Allen Ducker was tired of working retail in an industry, he perceived as, “dying” and was ready to put Allied up for sale! 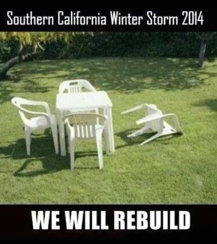 Fred and Judy were just sitting around when Fred looked to her and said … “You know, Allied and Whistle Stop have been competitors and colleagues for nearly 30 years … and “…. Before he could say another word …… Judy looked him and said, “you are not thinking of buying Allied”?   … and Fred replied … “just thinking about it.”

Well … for those of you who know Fred – he rarely spends time in contemplation – he has built a reputation, in both his personal and professional life, as a risk taker – a maverick – and a gunslinger … so within days, Fred, Brian and the Manager of Allied Model Trains, Nick Barone, had their first meeting and made an offer to purchase Allied Model Trains. 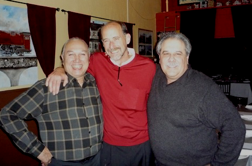 So on July 2007 – the grand opening of the New – Friendlier Allied Model Trains opened its doors.

That meant Fred would spend more time on the West side weaving in an out of his duties at The Original Whistle Stop and living the dream of being a Los Angeles freeway commuter!

Fred’s daughter, Paige Weber, called and informed he was officially going to be a “Grandpa” to a beautiful baby girl – Natalie Brooke and owning all rights and privileges of that title.

Though somewhere inside Fred hoped for a boy,  thinking a grandson could ride the rails and someone he could teach his passion and craft of the railroad and hobby industry …boy was he mistaken … 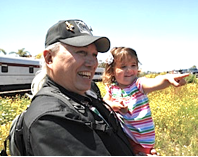 From the time Natalie was very little to the present age of 7 – she loves trains ….but only with her Grandpa! 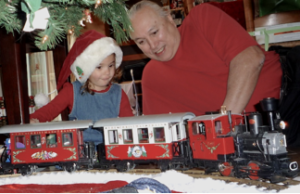 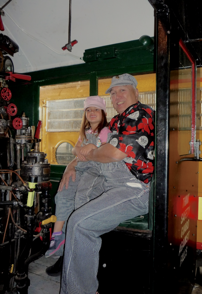 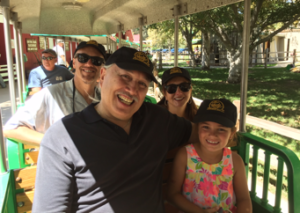 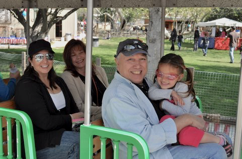 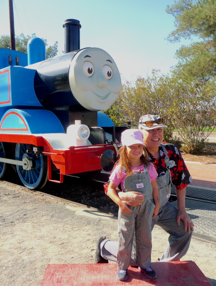 The Internet was gaining steam. The business model of Commerce changed and the likes of Amazon – EBay became competitors. Manufactures began selling direct … a huge blow to the small mom-pop of days gone by.

Fred, with his continual optimism, would not buy into the failings or chatter of the industry – nor succumb to the demands of these internet companies. He choose to fire up the engines – ready to climb the grade – and take on the manufactures – head on.

With this change in practices, it was becoming clear that in order for most businesses to survive in this economy – cuts needed to be made. The latest casualty of the downfall of western civilization – was ‘customer service”.

Fred held a strong opinion that to be successful – regardless of what is going on around you – you absolutely needed to provide your customers with a warm – friendly greeting and a helpful and knowledgeable staff.

Though his team was “good” – he knew they needed to be ‘better” and decide to step-up to a higher level of “customer satisfaction”.

To do this, he needed help, an expert at teaching, communication and people skills. He called upon Judy – this time not as the Administrator but as a Trainer.

Her experience in retail, managing and training staffs as well as her role as a Lifestyle Coach would expose the crew of The Original Whistle Stop to a new level of customer service training. Soon a tier management system and P&P were developed to ensure nothing was missed and no customer was left behind. …

After months of preparation … the Team was ready for the challenge! 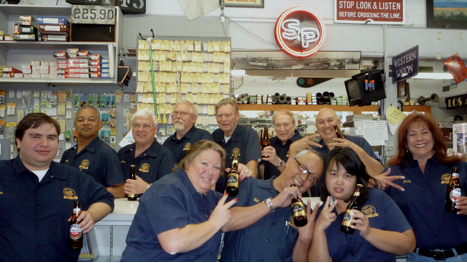 Some things must end so new beginning can emerge.

Brian fiancé found a place in the real-estate industry (buying- fixing- reselling property) and Brian was her support-staff. With the economy taking a downturn and the housing market becoming a buyer’s paradise it became clear that Brian’s time could not easily be divided between assisting Karin and effectively managing a full-time retail establishment – such as The Original Whistle Stop.

And Brian was faced with a choice. So on May,2011, Brian left his active commission as Second in Command of TOWS

The winds … are changing again.

Due to abrupt financial concerns … Allied was forced to close its doors.

These days, you will find Fred – hard at work – full-time – at The Whistle Stop …

Picture you and Sandra having a jack in your office 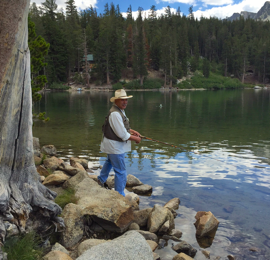 with his hand is often in a cast.